Home Health This is Your Child’s Brain on Video Games

he following is a behind-the-scenes glimpse of how gaming impacts a child’s nervous system. 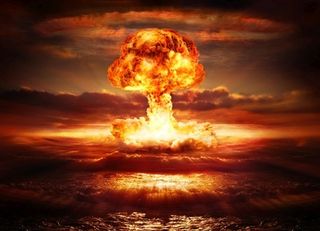 On the eve of his big sister Liz’s high school graduation, nine-year-old Aiden sits with his parents and relatives at a celebration dinner, bored by their “adult” conversation and irritated at all the attention showered upon Liz. He can’t wait to get back to his video game! Before dinner, Mom had (annoyingly) called him away to join the family, and then she got mad when he spent a few minutes getting to the next level and saving his game. So many people in the house make him restless; he squirms uncomfortably and drums his fingers on the table, waiting to be excused.

Finally, he is allowed to escape the dinner table, and he settles into a corner of the living room couch to play his Nintendo DS. For the next hour or so, he is completely oblivious to the company in the house. Although he’s already played much longer than his mother likes, she lets him continue, knowing these family situations are a little overwhelming for him. And besides, the game keeps him occupied. What’s the harm? she thinks. It’s just for today.

However, in the meantime, a perfect storm is brewing. As the play continues, Aiden’s brain and psyche become overstimulated and excited — on fire! His nervous system shifts into high gear and settles there while he attempts to master different situations, strategizing, surviving, accumulating weapons, and defending his turf. His heart rate increases from 80 to over 100 beats per minute, and his blood pressure rises from a normal 90/60 to 140/90 — he’s ready to do battle, except that he’s just sitting on the couch, not moving much more than his eyes and thumbs. The DS screen virtually locks his eyes into position and sends signal after signal: “It’s bright daylight out, nowhere near time for bed!” Levels of the feel-good chemical dopamine rise in his brain, sustaining his interest, keeping him focused on the task at hand, and elevating his mood. The intense visual stimulation and activity flood his brain, which adapts to the heightened level of stimulation by shutting off other parts it considers nonessential. 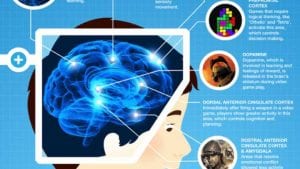 The visual-motor areas of his brain light up. Blood flows away from his gut, kidneys, liver, and bladder and toward his limbs and heart — he’s ready to fight or escape! The reward pathways in his brain also light up and are reinforced by the flood of dopamine. He is so absorbed in the game, he doesn’t notice when his little sister, Arianna, comes over until she puts her chubby hand on the screen, trying to get his attention.

“DooOOON’T!!” he shouts and roughly shoves her out of the way. Arianna falls backward, bursts into tears, and runs to their mother, who silently curses herself for letting Aiden play this long.

“All right, that’s it. Time to start getting ready for bed. Get your pajamas on and you can have a snack before you go to bed,” she says, pulling the DS out of Aiden’s hands and turning it off in one fell swoop. Aiden looks at his mother with rage. How dare she ruin his game because of his stupid sister!

“Fine!” he shouts, runs up the stairs, and slams his bedroom door. His primitive brain is fully engaged now, turning him into an enraged animal ready to fight off all challengers. He rips all the sheets off his bed and then throws his lamp on the floor, providing a satisfactory crash and shatter. Thinking about how wronged he’s been and filled with visions of revenge, he kicks the wall a few times and then pounds on his bedroom door, putting a big hole in it.

Downstairs, his relatives sit in quiet shock and murmur to each other how they’ve never seen him act like this. Dad runs up the stairs to contain his son. Calmly, his dad holds him in a bear hug from behind, waiting for the rage to subside.

As the dopamine in his brain and the adrenaline in his body begin to ebb, his rage loses its focus. Now, the pent-up energy takes on a disorganized, amorphous form. Aiden feels like he can’t think straight or get himself together. While he spaces out, his dad helps him put his pajamas on and they go back downstairs. Stress hormones remain high, however, making it difficult for him to relax or think clearly. He seems a little confused, actually. His relatives look at him with a mixture of concern and love, but they also wonder why his parents let him “get away with” this kind of behavior. His mother intuitively knows that direct eye contact will overstimulate him again, so she approaches him slowly from the side, and rubs his back gently.

When his favorite aunt looks him in the face sympathetically, he immediately distrusts her intentions. Eye-to-eye interaction is interpreted by his primitive-mode brain as a challenge, and he starts getting revved up again. His mother intervenes, and takes him up to his room. She lowers the light, settles him into bed, and starts to read him a soothing story. His nervous system attempts to regulate itself back to normal, but it seems to still be held hostage by his hyped-up emotions. That night, after he does finally fall to sleep, Aiden awakens repeatedly with panic attacks — his heart races and blood pounds in his ears. He’s scared of the dark, and worried that his angry outburst has upset and alienated his parents. His mother, meanwhile, confiscates the DS and decides to take it with her to work on Monday. (She really wants to throw it in the trash, but it was expensive!)

The following morning, the fight in Aiden has subsided, but the aftermath leaves him in a fog, listless, weepy, and exhausted. He experiences an increased craving for sweets while cortisol, the stress hormone, drives his blood sugar up and down erratically.  It will take weeks before his body, brain, and mind return to some sense of balance.

Meanwhile, his mother reaffirms her commitment “to get rid of those damn video games.”

Perceived Threat and the Fight-or-Flight Response

Does Aiden’s story sound familiar? Why would a seemingly normal, loving child become so enraged and difficult after playing video games? Though his response may seem extreme, there’s actually a completely natural explanation for Aiden’s behavior.

Playing video games mimics the kinds of sensory assaults humans are programmed to associate with danger. When the brain senses danger, primitive survival mechanisms swiftly kick in to provide protection from harm. This response is instantaneous; it is hardwired in our genes and necessary for survival. Keep in mind that the threat does not have to be real — it only needs to be a perceived danger for the brain and body to react.

When this instinct gets triggered, our nervous system and hormones influence our state of arousal, jumping instantly to a state of hyperarousal — the fight-or-flight response. These feelings can be hard to shake off even after the provoking incident is over and the threat — real or perceived — is gone.

In medical school, our instructors referred to this state as “running from the tiger,” since during ancient times humans protected themselves from predators by literally fighting or fleeing. Today, we still need this rapid stress response for emergency situations, and on a day-to-day basis mild stress reactions help us get things done. But for the most part, repeatedly enduring fight-or-flight responses when survival is not an issue does more harm than good.

When the fight-or-flight state occurs too often, or too intensely, the brain and body have trouble regulating themselves back to a calm state, leading to a state of chronic stress. Chronic stress is also produced when there is a “mismatch” between fight-or-flight reactions and energy expenditure, as occurs with screen-time. Indeed, the build-up of energy is meant to be physically discharged to allow the nervous system to re-regulate. However, research suggests screen-time induces stress reactions even in children who exercise regularly.

Once chronic stress sets in, blood flow is directed away from the higher thinking part of the brain (the frontal lobe) and toward the more primitive, deeper areas necessary for survival, causing impairment in functioning. With children, whose nervous systems are still developing, this sequence of events occurs much faster than it does for adults, and the chronically stressed child soon starts to struggle.

It’s easy to imagine how an exciting video game can cause hyperarousal. But in fact, numerous mechanisms act synergistically to raise arousal levels with all types of interactive screen-time. And contrary to popular belief, many of them occur irrespective of content. The figure below outlines some of these factors: 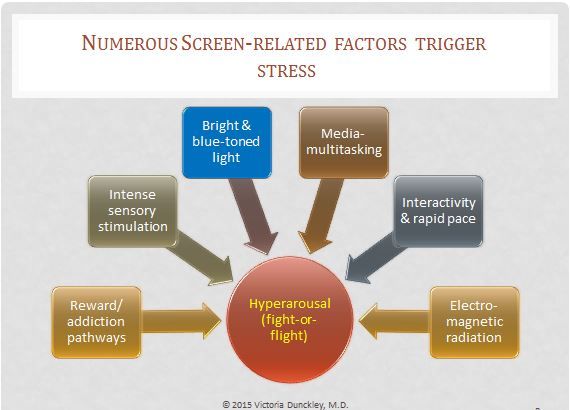 Because chronic stress effectively “short circuits” the frontal lobe, a hyperaroused and mentally depleted child will have trouble paying attention, managing emotions, suppressing impulses, following directions, tolerating frustration, accessing creativity and compassion, and executing tasks. All of these effects are compounded by screen-time disrupting the body clock and hindering deep sleep. In fact, the effects on sleep alone can explain many of the mood, cognitive and behavior issues associated with screens, and also explain how screen effects can build over time, making them easy to miss.

When people say my strict screen-time recommendations—which are based not just on clinical experience and research but also on how the brain works—are “not realistic,” and that children “must learn to manage technology,” my response is this:

Parents need to learn the science behind how screen-time overstimulates the nervous system, how this manifests as an array of symptoms and dysfunction, and what that looks like in their own child.  Learning this information can literally change the course of child’s life; it helps parents to make informed and mindful screen management decisions, and steadies them from being swayed by cultural trends and misleading headlines.  It puts parents in the driver’s seat.

While the world may have changed, how the brain responds to stress and what it needs to thrive has not.

Wells, Stefanie L. “Moving Through the Curriculum: The Effect of Movement on Student Learning, Behavior, and Attitude.” Rising Tide 5 (Summer 2012): 1–17.

Starting University in September? Get a head start with Alison!

Tokyo Olympics: Get Inspired, Get Learning, Get Active!

What You Can Do To Fight Climate Change

Learning and Development – The GAP is coming