Home blog Can we model the coronavirus pandemic?

With governments scrambling to respond to COVID-19’s continued sweep across the globe, policymakers and public alike are having to confront challenges society hasn’t faced for a century or more.

One of the most striking issues the pandemic has thrown up is how to cope with uncertainty. With the virus only emerging in December 2019 (hence its moniker of ‘novel’ coronavirus), there are many unanswered questions about what exactly the virus is, and what effect it will have on the world in the weeks ahead.

With the accuracy of antibody tests being called into question by many experts – and thus little known about how far the virus has spread into the populations of different nations – people are increasingly turning to pandemic modelling to provide a degree of future certainty where none currently exists.

How will coronavirus end?

Mathematical models are created by scientists in order to provide predictions. In the case of epidemics and pandemics, modelling can be vitally important because it allows policymakers to see what shape the spread of a virus might take in the months to come.

According to The Conversation, “insights from mathematical modelling are vital to ensuring that authorities can prevent as many deaths as possible.” For pandemics, these are called SIR models – as they attempt to plot the numbers of people Susceptible to the virus, those who become Infected, and those who Recover (or die).

There has been a swathe of models that have filled timelines and news cycles, from those of established institutions like the Institue for Health Metric Evaluation (IHME) in America, to independent websites like COVID-19 Projections, who use artificial intelligence to model the pandemic’s progress, country to country.

Do coronavirus models get it wrong?

In the case of the spread of coronavirus in the UK, pandemic modelling has already played an important role. The UK’s government’s admitted early strategy was one of ‘herd immunity’ – letting the virus move through the country to the point where its reproductive number (R0) fell below one, and the virus would start infecting fewer and fewer people.

However, that policy was abruptly abandoned when the Imperial College team that had been advising the government produced a new model – based on data coming out of the worst affected parts of Italy – stating that, if left unchecked, the virus would quickly overwhelm the National Health Service, and result in 500,000 deaths. The same model also provoked the US government into supporting a similar shutdown of the economy across the Atlantic.

Imperial’s initial model, argues The Guardian, was “based on 13-year-old code for a long-feared influenza pandemic, [and] assumed that the demand for intensive care units would be the same for both infections.”

Nature reports that, “the [Imperial] researchers initially estimated that 15% of hospital cases would need to be treated in an intensive-care unit (ICU), but then updated that to 30%, a figure used in the first public release of their work on 16 March. That model showed the UK health service, with just over 4,000 ICU beds, would be overwhelmed.”

Imperial updated their model using data coming out from Lombardy and Wuhan to change their inputs, meaning that the model instead predicted that the virus would swamp health systems if left unchecked. 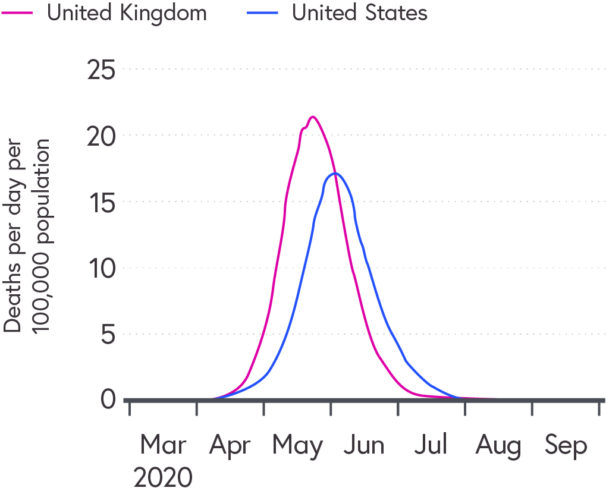 The Imperial model that shocked governments into action.

One of the ‘risks’ of modelling something as unpredictable and unknowable as a new virus is that changing the parameters even slightly at the start of the process can result in wildly different results – such models are extremely sensitive to their initial conditions.

Another modelling team at the University of Oxford showed that, in the absence of any data on how many people in the UK are actually infected, the same number of confirmed cases and deaths could equally point to a low Infection Fatality Rate (IFR), and a lower hospitalisation rate as the pandemic unfolds.

This argument has been used by those in favour of ending the lockdowns that have proved to be so punishing to economies worldwide, even though the ‘Oxford model’ only demonstrates that a wide range of possibilities exist when we have so little raw data on how many people have actually been infected with coronavirus, and how contagious it really is.

Pandemic modelling is important because it presents governments – and ordinary people – with a range of possibilities about what the future holds.

Although the worst-case scenario of the ‘Imperial model’ has, fortunately, yet come to pass, it did prompt policymakers into action. Equally, the ‘Oxford model’ has emphasised the need for testing in order to know how far the virus has spread – and thus how governments should react moving forwards.

As the British Medical Journal argues, “modelling is a necessary input to public policy decisions but should be taken as just one input among many, one piece of a large puzzle”. Used alongside other strategies like social distancing and contact tracing, modelling allows us to regain some measure of control over a fundamentally chaotic situation.

We should also bear in mind that models change as new information becomes available. Al Jazeera has explained to their readers that, “no single dataset exactly represents the reality on the ground. Every day, thousands of healthcare workers, government agencies and researchers are each collecting, processing and sharing what they know about the virus. The goal is to gather the most reliable data that can help people understand the outbreak as it evolves.”

Why ‘crushing the curve’ is important.

Ultimately, science is built on disagreement. When policymakers tell us that they’re ‘following the science’, that claim might overlook the fact that scientists don’t always agree on the best way forward – and that this lack of consensus is healthy.

Mathematical modeller Jasmina Panovska-Griffiths urges us to remember that, “instead of focusing on which model is correct, we should accept that one model cannot answer it all.” As one aphorism in the field states: “All models are wrong, but some are useful”.

For more information on how modelling the coronavirus pandemic can help the public and policymakers make important decisions, join The Open University’s new course: COVID-19: Pandemics, Modelling, and Policy.

Changing Careers During The COVID-19 Pandemic

Ivy Makoni: “Alison opens the door to education for everyone for free.”

Lesson of the Day: ‘Who Will Get the Coronavirus Vaccine First?’

Are You Good at Giving Gifts?

How To Land A Remote Coding Internship—& What To Expect